The construction of the $15.6m French Pavilion, which is located within the Mobility District of the 4.38km2 Expo 2020 Dubai site, is 48% complete, with work progressing on schedule for a September 2020 handover, well before the 173-day “world’s greatest show” begins on 20 October.

In an exclusive conversation with Construction Week, the general commissioner of the French Pavilion, Erik Linquier, says: “We began work on the pavilion in the middle of 2019, after the 4,700m2 plot was handed over to us. We’re almost halfway through the construction. The shell and core of the pavilion is almost complete.”

Structural works have been completed, with blockworks nearing completion. MEP works are currently ongoing on the site.

The installations of LED panels is scheduled for mid-April, with the pavillion’s scenography due to start at the end of June. The assembly of shops and restaurants will commence by the end of July.

The construction of the pavilion, which has a built-up area of 4,200m2, is being led by French developer-operator Cofrex – the French government firm responsible for organising and promoting France’s participation in World Expos.

The main contractor responsible for the construction is Six Construct, which is a subsidiary of Belgian construction giant Besix. Marseille-based architectural firm Atelier du Prado and Paris-based Celnikier & Grabli Architectes have designed the pavilion based on the theme “Light, Enlightenments”, chosen by the French government. UAE-based Rice Perry Ellis is the consultant on the project.

The design of the pavilion is based on three pillars of bio-climatism, including controlling solar gains, providing a highly insulating waterproof envelope, and limiting the use of fossil fuels as much as possible. 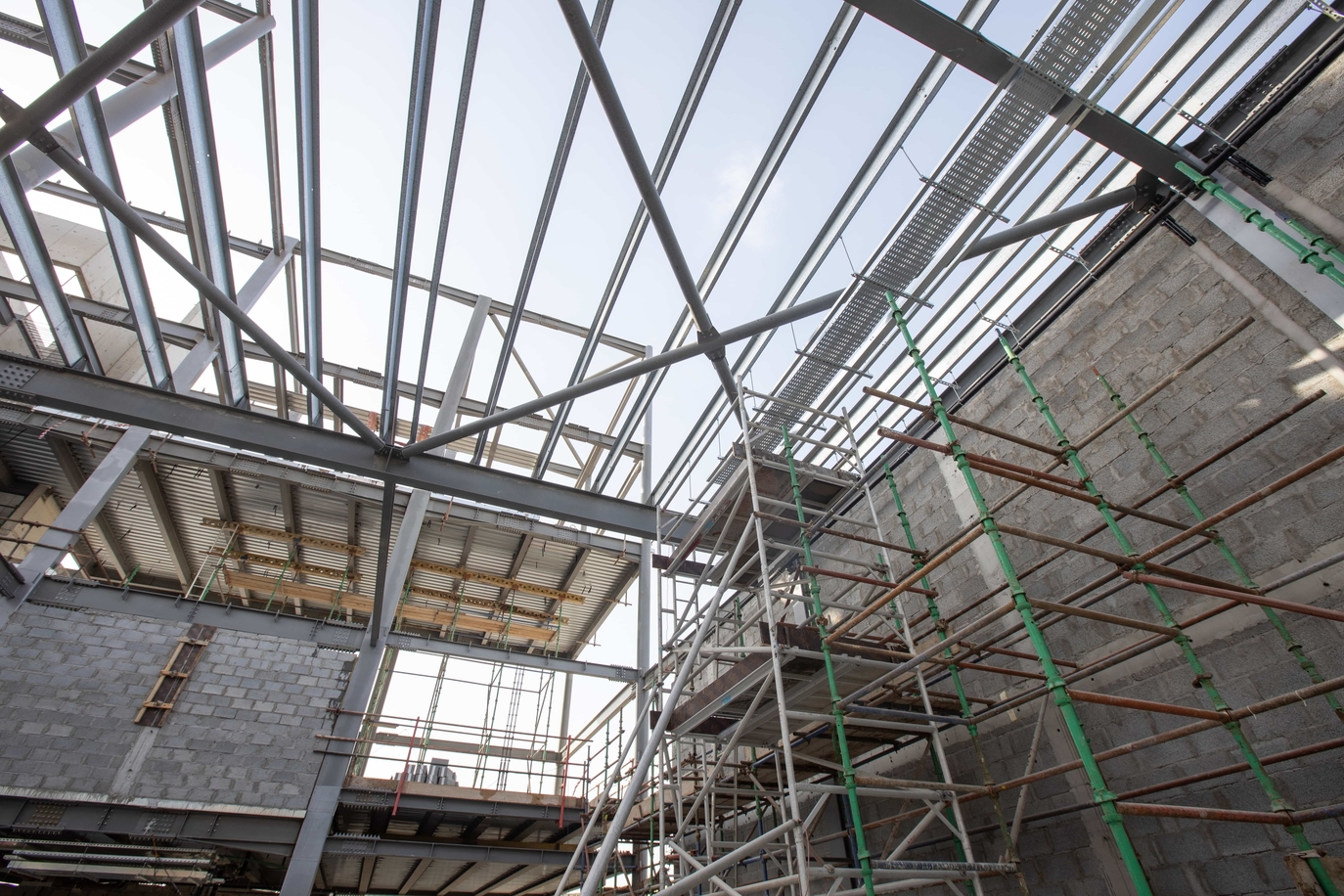 “We’re almost halfway through the construction. The shell and core of the pavilion is almost complete.”

In keeping with its theme, the pavilion will comprise 2,700m2 of photovoltaic (PV) panels covering the external façade and the roof, which will power 80% of the pavilion’s electricity needs.

Linquier says: “These PV panels comprise high productivity PV cells that are developed by the French public government-funded research organisation Commissariat à l’Energie atomique et aux énergies Alternatives (CEA), who have created these panels specifically for the Expo 2020. This is the first time that these panels will be displayed and used.”

On the inside, the French Pavilion has unveiled a 5,100m2 built-up area façade, including installations, interactive experiences, shops, and restaurants on the ground floor; technical and administrative offices on the first and second floor; as well as a conference room and meeting rooms on the third floor. The pavilion will also feature a 1,160m2 French-style garden structured in four squares.

In addition, the pavilion hosts a 40m terrace, as well as a canopy hanging at an altitude of 15m, which along with the façade forms an artificial screen and sky that dematerialise day and night in line with its theme.

As part of the Mobility District, the pavilion will also focus on highlighting the achievements and the strength of the French companies that have begun to lead the world in terms of mobility solutions.

Linquier concludes: “We have designated approximately 1,000m2 to showcasing French expertise on mobility. We also have a large outdoor space that will showcase interactive experiences with electric bikes and more. Mobility will be highlighted in terms of connectivity between infrastructure, in terms of speed, as well as in terms of light.”