Property development giant Ithra Dubai, which is wholly-owned by the Investment Corporation of Dubai (ICD), has marked a major milestone on it’s One Za’abeel project – the twin-tower development near Dubai World Trade Centre on Sheikh Zayed Road – with the completion of the final lift of the 900-tonne second section of ‘The Link’, which has reached its final position – perpendicular to the twin towers – 100m above the ground.

The Link qualifies One Za’abeel to attempt to break the Guinness World Records™ title for the “Longest Cantilevered Building” in the world.

“For the purpose of this record, a cantilevered building is defined as a permanent occupiable space, with a floor, ceiling, and enclosed sides, which are the walls. It must be anchored at one point only and be unsupported from the main support structure,” the official adjudicator of the Guinness World Records, Danny Hickson, said.

Although The Link is a 226m-long construction made from a composite material of steel and concrete suspended perpendicular to the One Za’abeel twin towers, its 66m cantilever – which provides 360-degree views of Dubai – is anchored at only one point while the rest floats above The Happiness Bridge offering views of The Burj Khalifa, The Museum of the Future and the Downtown Dubai skyline.

The Link has been constructed of seven steel modules – named Assembly A-G – that were slid into place before they were lifted into their final position on the building.

The lift of the 192-metre-long first section of ‘The Link’ to its final position took place in September. The lift — one of the heaviest in the region — was carried out over a period of 12 days, with a total weight of 8,720 tonnes.

More than 110 special jacks and heavy-duty strand jacks were used for the operation, collectively by a team of global experts in the fields of construction, engineering, and contracting.

The second and final lift joined the cantilevered structure with the first section of The Link and was executed over the course of four days. More than 55 jacks and strand jacks, and 12.2km of strands were required to lift this final portion weighing over 930 tonnes.

Despite the COVID-19 pandemic, delays in receiving government approvals, and disruption in the construction industry’s supply chain both the sections of The Link were lifted successfully and safely, on schedule.

Commenting on the on-time milestones of The Link, the chief executive officer of ALEC, Kez Taylor, tells Construction Week: “We set a realistic target, given all the circumstances and worked towards achieving it. We set a date; we got everyone committed to that date; we aligned our plans and implementation to that date. We had a lot of intermediate milestones and objectives that we had to meet. We were prepared for contingencies, and everything went according to plan and both of these lifts went ahead as scheduled.”

“There are often a lot of constraints and a lot of challenges that we meet along the way, but as a contractor we always deliver the best quality and on-time. We have managed to navigate our way through the challenges.

“For instance, when COVID-19 hit, we were very quick to react. We used a lot of our digital technologies and acted on very accurate data. We set up war rooms. We made sure that on a daily basis, we were very quick to react to the constant changes. It helps that as an organisation, we’ve got very good processes, systems, technologies, and people that back us up. The guys on-site also did exceptionally well.”

The Link, when completed, will house Michelin-starred restaurants, observation decks, an infinity pool on its roof, and an infinity view – with a glass floor and glass walls that appear to float in mid-air. 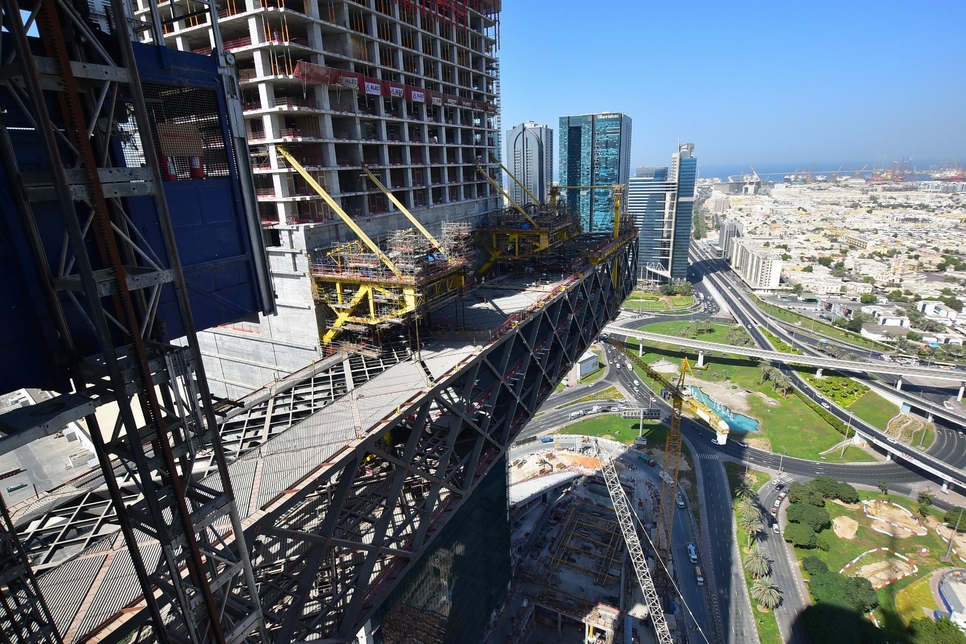 The Link – perpendicular to the twin tower buildings – is 80m in height and 80m in width and its architecture and construction make it one of Dubai’s upcoming iconic structures.

“The One Za’abeel Towers were not built straight, vertically, like most buildings. Every level was inclined about 1.5 millimetres as part of the precambered build. This was designed on purpose because when the two towers received the weight of The Link they moved inward towards The Link, and aligned. They would now be genuinely vertical as you would expect from any other building,” the chief development officer of Ithra Dubai, Raad Jarrah explained in an exclusive conversation with Construction Week.

“The first section of The Link was 8,720 tonnes and the second section was 930 tonnes. However, we have taken more than the weight of the steel structure into consideration. We had to consider the additional weight that will be added by the concrete, the fit-out, the MEP, and all the other works that will come into play by the time we’re done with the construction.”

In addition to the weight of the link, construction stakeholders also needed to take into consideration the movement of the building.

“Every building that is this tall will move due to wind forces that generate this type of movement,” Jarrah adds. “So to allow for this movement, what we ended up resolving is the composite structure below The Link so that there’s steel embedded in concrete. Since steel is more pliable than concrete, it can accommodate the movement of the building.”

Stakeholders of the One Za’abeel twin tower development include industry leaders ALEC as the main contractor; WSP Middle East as the multi-disciplinary engineering consultant for the twin-tower development; Nikken Sekkei as the lead architect for the project; MACE International as the project manager; Omnium International as the cost consultant; APCC as the enabling contractor; Rockwell Group as the architects; LW as the design group; STUFISH handling the entertainment architecture; Denniston handling the interior design for hospitality; and SOCIAL handling the F&B interior design.

The mixed-use development by Ithra Dubai consists of two skyscrapers: Tower A that is 300m tall and Tower B, which stands at 235m, rising from seven levels of basement, three levels of podium for retail and restaurants, and 77 high-speed lifts, with more than 470,000m2 of total built-up area.

Commenting on the importance of ALEC as the main contractor and the focus on stakeholder collaboration, Issam Galadari, the CEO of Ithra Dubai, and the name behind other World Record structures such as the Burj Khalifa in Dubai, said: “It is very rare that you come to a construction site that is maintained so well; where everything is so clean, well put-together, disciplined, and organised. ALEC deserves the credit as the main contractor for not just bringing this idea to life, but also doing so with such a fantastic manner of operations.

“Especially given the current COVID-19 situation, they have prioritised the health and safety of not only the visitors, but each and every worker on site. They have added a sense of security on-site with constant temperature screenings at the gates, social distancing protocols and other measures.”

“This project is successful due to the collaboration of all of these stakeholders. Every stakeholder involved may bring their own ideas to the table, but at the end of the day, each of our construction stakeholders have worked together in harmony, and that is visible in the project.”

The development will comprise premium office space, 263 high-end residential units, three floors of retail space, 497 ultra-luxury hotel rooms and serviced apartments, and the world’s first One & Only urban resort. The One Za’abeel project is expected to be completed in phases through late 2021 and 2022.