HH Sheikh Hamdan bin Mohammed bin Rashid Al Maktoum, Crown Prince of Dubai and Chairman of the Executive Council conducted an inspection tour to follow up on the construction progress of the $1.4bn (AED5bn) Shindagha Corridor Project, one of the largest roads projects, currently, implemented by Dubai Roads and Transport Authority’s (RTA).

Extending 13km from the Sheikh Rashid Street through Al Mina Street and Al Khaleej Street up to Cairo Street, the project includes the Shindagha Bridge project, which is a part of Phase 3 of the Shindagha Corridor Project.

Construction work on the bridge is progressing and upon completion will meet the needs of the mega development projects in the areas including Deira Islands, Dubai Waterfront, Port Rashid, and the Dubai Maritime City.

During his visit, Sheikh Hamdan said that Dubai has been implementing projects as part of an ambitious development strategy that places the interests of citizens and the comfort and happiness of residents and visitors at the top of its priorities.

Dubai has allocated large investments for infrastructure projects, with the sector accounting for 46% of the total government spending in the emirate’s 2020 budget.

Today, I was briefed on the Shindagha Corridor, a major @rta_dubai project that embodies the vision of our wise leadership to enhance our infrastructure with leading projects that serve the community and support economic activity. pic.twitter.com/nx4xQCWe6J— Hamdan bin Mohammed (@HamdanMohammed) October 31, 2020

HE Mattar Mohammed Al Tayer, director-general and chairman of the Board of Executive Directors of RTA welcomed the Dubai Crown Prince, who then boarded a ferry to review the construction progress at the bridge, which marked 75% completion.

The bridge is 15.5m high and rises above the Dubai Creek and extends 295m in length. The height makes it easy for boats of all sizes to pass from beneath the bridge. It comprises six lanes in each direction in addition to a three-metre lane for pedestrians and cyclists.

Additionally, the bridge has an architectural arch-shaped design that looks like an infinity symbol. The top of the infinity arch rises 42m, and approximately 2,400 tonnes of steel will be used in the construction of the bridge. The bridge can accommodate 12,000 vehicles per hour in each direction.

Moreover, the Shindagha Bridge project combines all elements of integrated transport including two large lifts at both ends of the bridge and three shared bridges for pedestrians and cyclists. 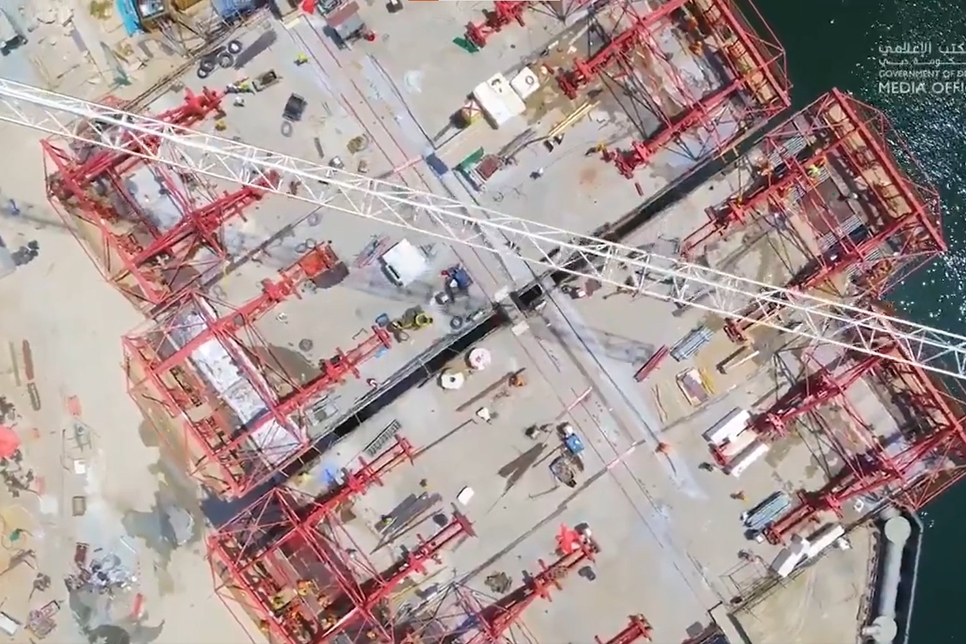 One of these bridges is currently under-construction on Al Khaleej Street, while the other two will be constructed on the Sheikh Rashid and Al Mina Streets at a later stage.

The project is part of RTA’s efforts to enhance sustainable mobility and provide a unique environment for pedestrians and cyclists.

The Shindagha Corridor Project’s construction work has been divided into five phases that support several development projects in the area such as Deira Islands, Dubai Waterfront, Dubai Maritime City and Port Rashid.

Once completed, the Shindagha Corridor Project will have the capacity to accommodate larger traffic volumes and reduce the journey time on the corridor from 104 minutes to 16 minutes.

Phase 1 and 2 of the project has been completed and included upgrading the junction of Sheikh Rashid-Oud Metha Streets at the Wafi Junction, and the intersection of the Sheikh Rashid-Sheikh Khalifa bin Zayed Streets. 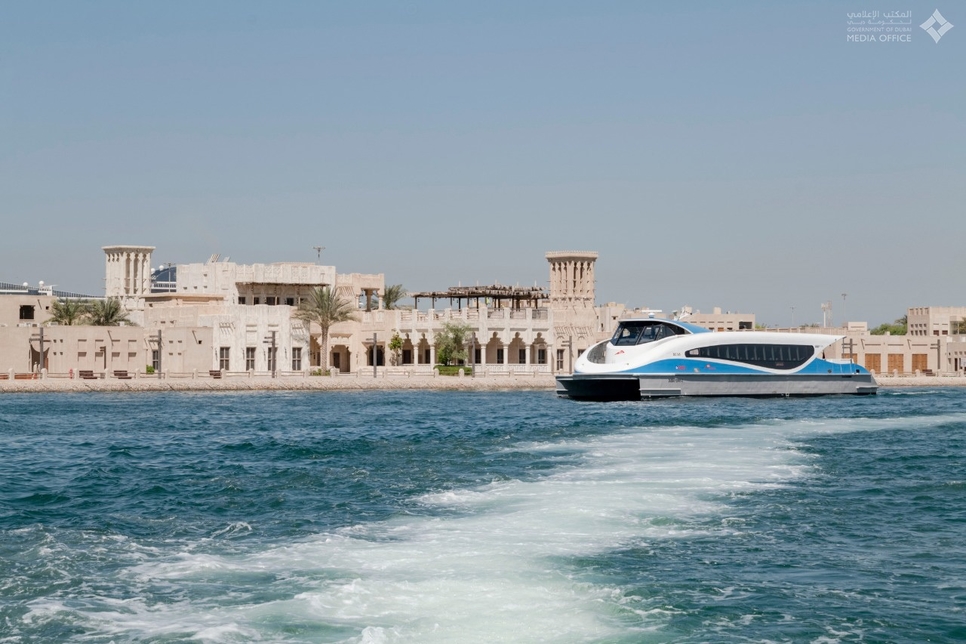 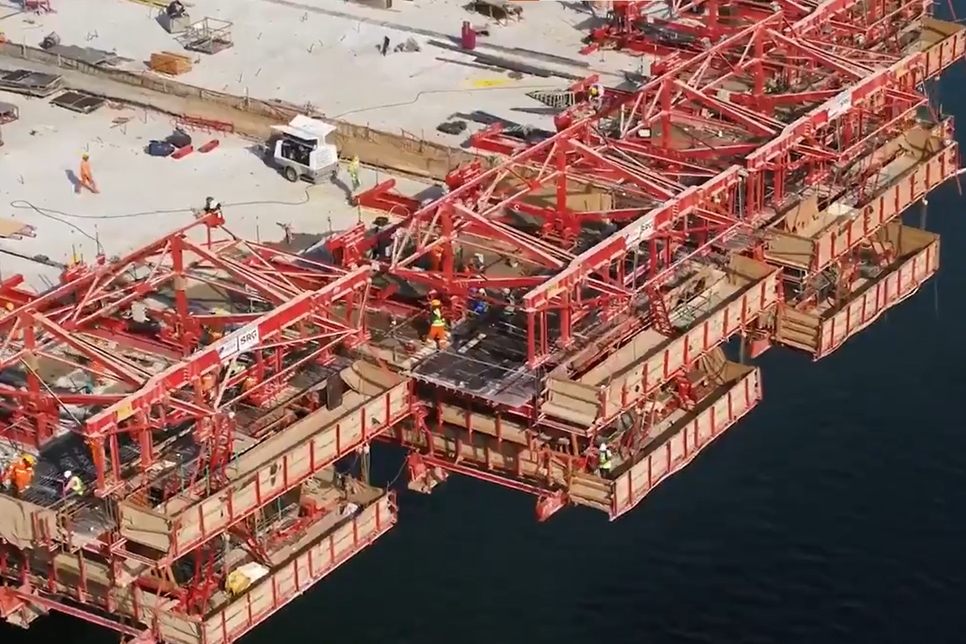 Furthermore, Phase 5 covers the construction of bridges extending 1.5km southwards to Deira Islands and is scheduled for completion in 2027.

Talking about the project, Al Tayer said: “RTA has incorporated unique constructional elements and systems in the construction of the Shindagha Bridge in order to make it well protected and more sustainable. These include building foundations at a depth of 40 metres below the waterbed of the Creek.

According to Al Tayer, high-density polyethene insulation (HDPE Liner) has been used for the base and for part of the columns immersed in the Creek; while also protecting the bridge columns from the maritime traffic in the Creek by using insulation materials and an anti-corrosion system called Cathodic Protection that works efficiently for 20 years. 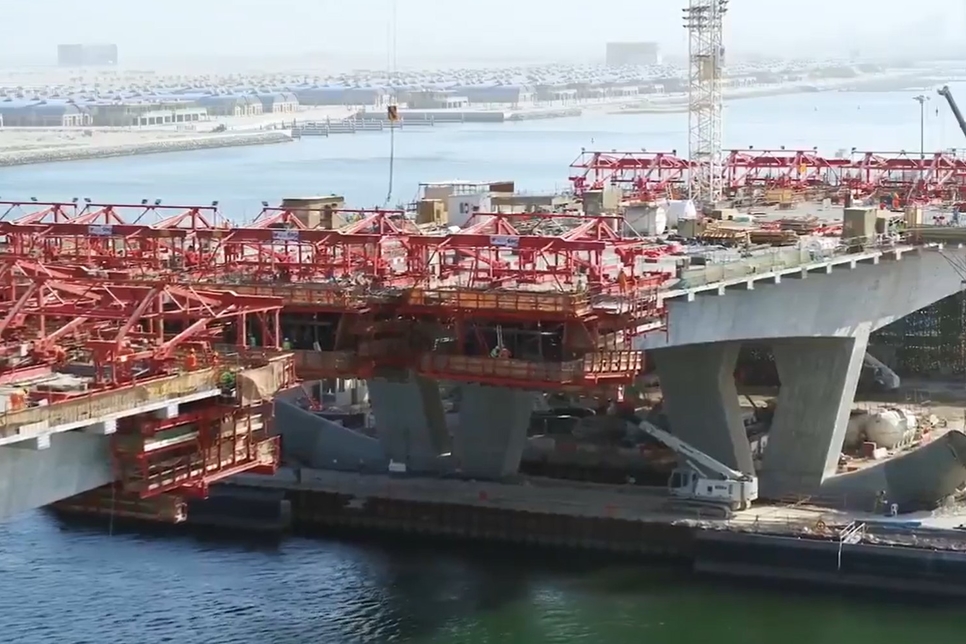 He added: “As for the metal arch, RTA used a system for insulation and protection against rust and adhesion to aquatic life that could come in contact with the water surface.

“This system allows the cleaning and maintenance of the metal parts of the arch touching the water surface, which extends the shelf life of the arch. The upper part of the metal arch is fitted with an anti-corrosion coating and protection system as well.”